Do you have stubborn problem areas that you can’t seem to overcome with diets and exercise? Are you avoiding the long process of surgery to remove fat cells? If you answered yes to either of these questions you may want to consider CoolSculpting. CoolSculpting is a completely non-invasive technological service that removes fat cells by freezing them.

What is the Science Behind CoolSculping?

CoolSculpting uses a method called cryolipolysis which is a fat reduction process that uses cold temperatures to reduce fat cells in the body. The cold temperature kills fat cells while leaving all other cells around them unharmed. After three months the dead fat cells completely disappear and desired results are reached.

CoolSculpting is a non-invasive, safe alternative to liposuction. Although the procedure is incredibly safe, patients often report feeling some discomfort during the process. It is common for those receiving CoolSculpting to experience sensations of pulling, tugging, intense cold, stinging, and other mild effects. Although this can sound scary, the irritation is mild and the benefits are proven to outweigh the temporary discomfort. 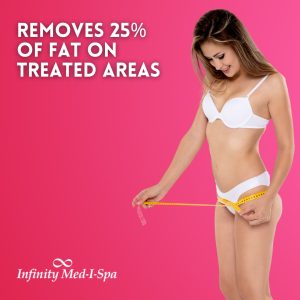 Is CoolSculpting Right For You?

Coolsculpting is meant to target stubborn, unwanted fat in certain areas of the body. It is an especially outstanding option for clients who are already in decent shape but can not seem to reduce fat in problem areas. If you are a person that struggles to remove fat in the love handle area, abdomen, thighs, chin, or back, CoolSculpting is an effective and safe option for you.

Are you ready to get the best prices in town on a variety of medispa products and procedures? Greystone Infinity Med-I-spa has you covered this month! We can’t wait to see your smiling faces, but if you can join us in person we have online deals as well! What is a...

Painless Perfection with the VI Peel

Before the VI Peel became available, peels were painful and took days to heal. People used to experience extreme pain to achieve glowing skin, but that is not the case with the VI Peel. If you are ready to have luxurious skin, a VI Peel is the perfect treatment to...

Say Goodbye to Your Double Chin

The double chin is an insecurity that haunts people all over the world. Middle schoolers may find double chins humorous, but most adults do not. People will do just about anything to get rid of their double chins. They work out their jaws, use facial carving skincare...

Aging gracefully is an art. Everyone wants to create that image of effortless beauty that they (along with the help of Bobbi Brown) painstakingly cultivated that morning in the mirror for two hours. Everyone wants smoother, tighter, younger-looking skin. The main...