Hormone replacement therapy (HRT) is a medication that commonly contains female hormones. It is most widely used to help ease the symptoms of menopause. Hormone therapy works by making estrogen in the body to replace what has been lost. HRT has been proven to have many benefits to help improve everyday life. 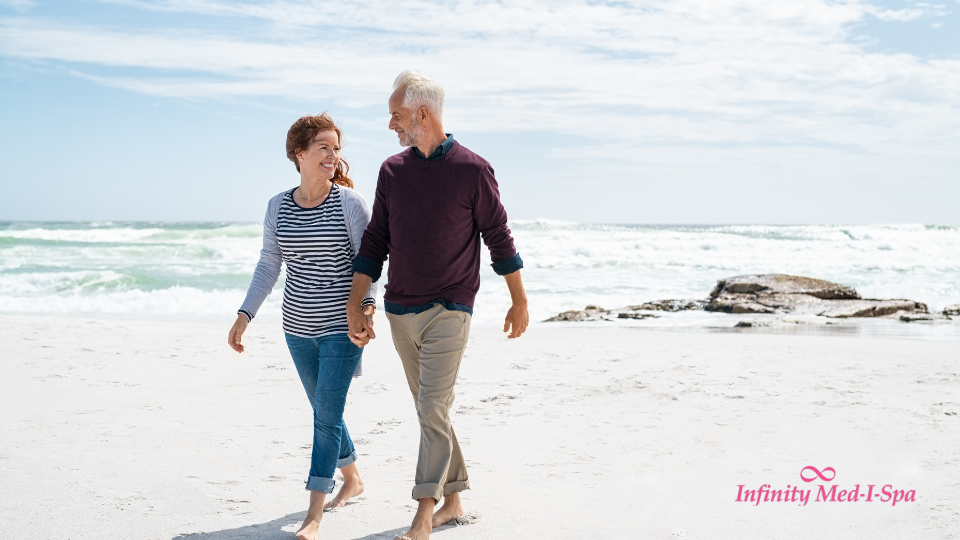 There are two main types of hormone replacement therapy. The first type is called combined HRT and is mainly used for women who still have their womb. The second type is oestrogen-only HRT for women who have had their womb removed in a hysterectomy. HRT is offered in multiple forms including tablets, patches, implants, gels, and sprays.

The Benefits of HRT

Hormone replacement therapy is an attractive option for women struggling with menopause. It can help relieve most common symptoms. Examples of symptoms include hot flashes, mood swings, night sweats, and a reduced sex drive. HRT is also known to decrease the risk of osteoporosis by helping prevent thinning of the bones. In addition, some women claim that it helps with fatigue and weight loss.

The Side Effects of HRT

Hormone replacement therapy has been revolutionary in the healthcare field regarding women. Thanks to HRT, problems that most women would not associate with hormones can be cured. For example, many women claimed that HRT cured or helped their anxiety and depression. In addition, the beneficial changes that HRT can provide to women’s sex drive helps strengthen their romantic relationships.

How to Get Started With HRT

Getting started on hormone replacement therapy treatment is something that should be discussed with a medical professional. You can usually begin HRT at the first symptoms of menopause. If you are between the ages of 40-45, your doctor may suggest a blood test to measure your hormone levels. The International Menopause Society recommends that HRT be started before the age of 60 or within the first 10 years of menopause. Reach out to your general practitioner to learn more about what hormone replacement therapy can do for you.

There are many things to love about the cold weather season. Hot chocolate, sweatshirts, and snowflakes warm our hearts, but they do not keep our skin safe. Proper skincare is vital during winter months because our skin suffers from wind and a lack of humidity in the...

How to Destress With Infinity Med-I-Spa

The daily stressors of life take a toll on your physical and mental health. Taking care of your body and mind is an essential part of self-care. Infinity Med-I-Spa offers a variety of products and services to help you relax and restore during the most stressful times...

How Can You Treat Acne Scars?

Acne is one of the most stubborn and noticeable skin conditions. Many people struggle with acne and acne scarring at some point in their lives. According to Yale Medicine, over 25% of women and 12% of men still struggle with acne in their 40’s. Acne often causes...

In today’s digital world where we are constantly connected to the world through our smartphones, it can be hard to carve out time for self-care. While it may seem counterintuitive, you have to make time for this if you want to be your healthiest, most productive self....